How to use a paperclip and a flute cleaning wand to remove a swab from the wing joint.

***DISCLAIMER:  This is just how I managed to remove a stuck swab.  If your swab gets stuck, contact your bassoon repair professional immediately, and stop tugging right away!!!***

I had heard all about it, the mysterious stuck swab.  I had never seen it in person, but I had heard horror stories about that moment where you think it’s all over.  I’ve read tales of amazing instruments permanently ruined by one small mistake.  But it had never happened to me, so it seemed like just a myth.

I had a fantastic practice session full of Piard, Milde, a Mozart Serenade, and a concerto for wind ensemble.  As I packed up, my mind was thinking of only one thing: the pork tenderloin I had marinated all day and the brand new rice cooker that just arrived today.  I went through my usual routine of packing up, relatively mindlessly, casually pulling the swab through the wing joint, when suddenly I felt the world stop with my arms.  The swab was stuck.

I looked down, wondering what had happened to lead me here.  I always wrap my swabs meticulously and unfold them fully before swabbing, so what could have caused this?  I messaged some colleagues, my teacher, and my repairman, and called the hardware store.  Unfortunately, they were closing in five minutes, so I could only use the tools in my apartment.  I read online and was told about screws soldered to metal dowels, of crushed wire coat hangers, and using a wooden dowel and tapping from the end I was pulling through.  I tried everything I could, but the sucker wasn’t coming out.

Naturally, I called my mother panicking about so many things.  How was I going to get to a repairman?  I don’t have a car.  Why did the store close at 4pm?  Was my Heckel ruined forever?  Why can’t I find a screwdriver?  Why does pork tenderloin take so much longer than pork chops?

For those of you who don’t know her, my anonymity-craving mother is the most brilliant and benevolent person on the planet.  She’s the living embodiment of every medical show hero: with seemingly no effort whatsoever, she solves things nobody else can.  She saves lives on a daily basis, and today she saved mine.

“Why not just use a paperclip instead of a screw?”

It was that simple, but nobody else had thought of that.  And within a minute, my bassoon was saved by the smartest person on the planet.

How To Remove A Swab From The Wing Joint

-Fold the paperclip out, with the thicker side on top.
-Cut (using wire cutters on the plier) the thick side so that the distance from the top of the curve to the point is just under 1/4 inch.
-Use the pliers to bend the point inward to avoid scratching the bassoon. 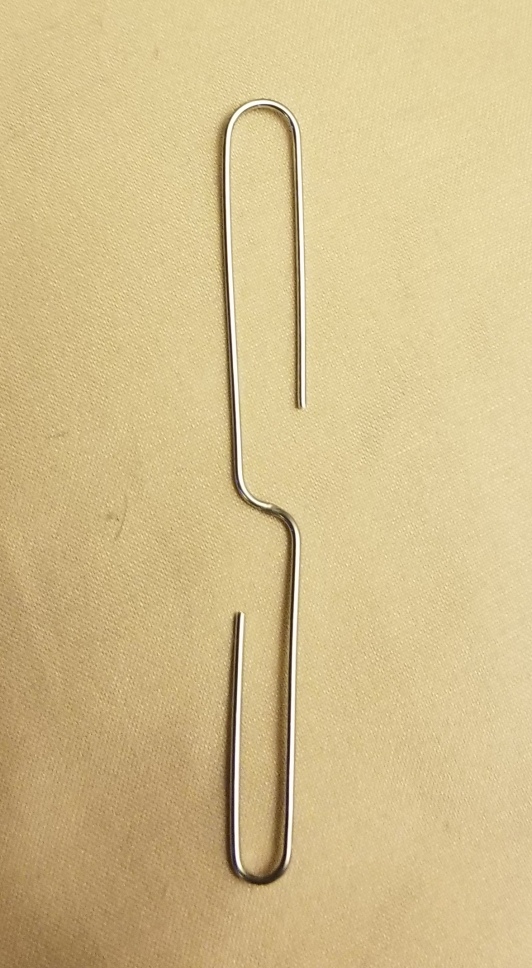 -Put the thin side of the paperclip through the opening of the flute cleaning wand.
-Using a piece of duct tape, attach clip to the wand.

-CAREFULLY insert the wand into the bassoon (pay attention to where water tubes are and such)
-CAREFULLY put the paperclip just past the swab, then tug downwards gently to poke the clip through the swab.
-PAINSTAKINGLY CAREFULLY AND SLOWLY pull the wand out (watching out for the water tubes again) and then remove the swab.

So that’s it!  As long as you do this with extreme caution, and as long as you didn’t tug the swab after it got stuck, this should work.  Again, please consult your bassoon repair professional immediately before doing anything.  This method is not a guarantee by any means, and I am not responsible for anybody else’s instrument!

If this helped at all, feel free leave a comment below telling my mother that she’s the greatest person on the planet.  Here’s to safe swabbing, effective practicing, and my first blog post on this website!

Recordings and Videos are from Vincent’s YouTube and SoundCloud.